This anthology, in French, English and German, provides a rare insight into the lives of Swiss Quakers. It includes the writings of such well-known figures as Pierre Ceresole, the founder of Service Civil International, Helene Monastier, and Elisabeth Rotten, but also the thoughts and lives of many lesser known Friends who expressed their belief by humanitarian actions. The views expressed are profound, sometimes sad, sometimes funny, and together show the distinct character of a group of non Anglo-Saxon Friends who have adopted the message of George Fox and made it their own. 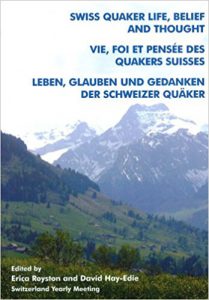 For addresses in Switzerland, available directly from bookorder@swiss-quakers.ch.  Price SFr.12 plus SFr.2 postage.